Skip to content
Tuesday, Australia Day, dawned with a cloudless sky and just the hint of a breeze.  By the time I had rigged the boat the wind had more or less settled on about 7 kn varying approximately between ESE and ExS.  Our start line was rather busy with yachts from the MBBC and those of the
NCYC approaching.  We had hoisted our Spinnaker one and a half minutes early, and in order to cross in time had to sail parallel to the start line to spill some wind.  But that put us to windward and clear air.  Both MOONDANCE and HAPPY DAZE had started ahead, both, however, without Spinnakers.  We passed them before CR.
We were very lucky on the second leg not having to tack on the way to the yellow GB buoy.  We could see the rest of the fleet bunched up in the distance with most of the boats sailing on a lower course, but the distance had shortened considerably when we rounded the buoy.  Next came DB and the hoist of the asymmetric kite and the run home.  OD’s outsized white chute came closer and closer; but we managed to stay ahead albeit with a diminished distance.
The result:  KAVEINGA,OD, FORTY TWO, and MOONDANCE.  11 boats with 26 pob. 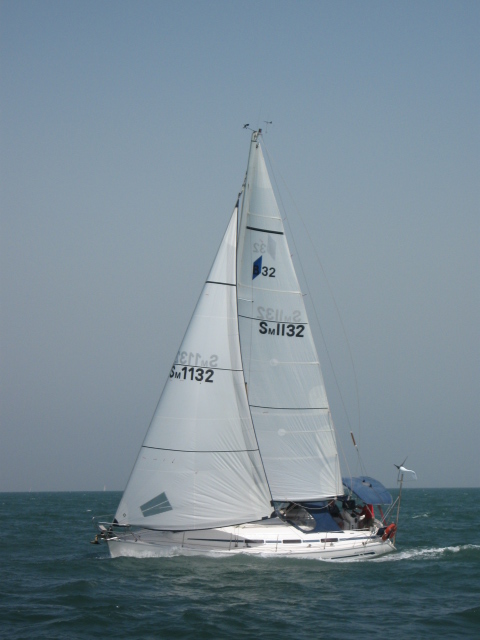