_Gathering at the sailors table at the club, it seemed that it might be
a quiet day out but that was not to be. Greg Hamilton poached his old
crew back to venture out in his new toy, Incredible, and I had a late
arrival of Phil from Sentier to join Wally and I._

_Starting unusually close to my start time we did a port tack towards
Bribie before tacking over towards Reef Point . Jaguar was clearly in
the lead and Carisma had done better than us and snuck in front by the
first mark. I heard of the withdrawal of my arch nemesis Kevinga as the
wind and chop are a bit much as at 32 ft he weighs half my weight for
roughly the same sail area. We both got in ahead of Jaguar by Garnet and
Carisma was just in front after rounding the mark when I noticed the
tack on his headsail had come adrift from the deck and he waved at us to
stay clear. Shame as I was looking forward to the duel with him on the
run back. The wind had stayed up and the rest of the fleet were well
behind us at this stage._

_Unlike most of the fleet I like to go a long way out towards Moreton
and try to have a slightly cracked off run back to Reef Point. As usual
the ever vocal JVP asked over the air if I was going to Tangalooma
before tacking. We settled in for a long haul in steady but strong winds
and watched the rest of the fleet tussle and tack back out from inshore
as we had our hot nibbles and rounded Reef Point in front for the run
home, wondering who was going to come snapping at our heals._

_Looking back at the fleet the handicapping must be close as most of the
boats were in a bunch at or after Reef Point. Crossing the line first I
wondered whose were the black sails closing in to realise it was Rick
Morgan on Dream Lover 2nd and the ever lurking predator of Freya 3rd,
Jo-De 7 in coveted 4th._

_Much banter and storytelling at presentation with 17 boats out and 54
sailors making their presence felt._

_Many thanks to Stewie for his sponsorship in whatever name it was in,
our many volunteers, and our Club MBBC._

_See you burglar’s for the RUM race next week._ 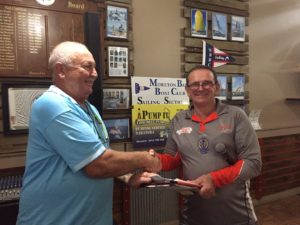 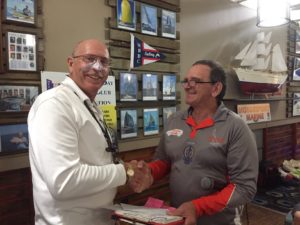 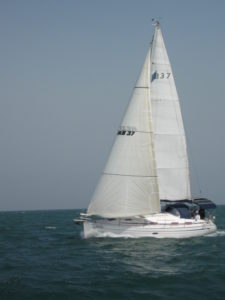