With a fresh N’Easter blowing it was decided to not run the Garnet Rock course today as it could well be very rough along the Redcliffe Peninsula. So a D’Bay starboard course was decided upon and it was looking very like a re-run of this weeks SAGS. The multihulls were odds on favourites for the placings and from the talk in the club beforehand you could have been forgiven for taking it as a forgone conclusion.

However, the work had yet to be done and races are never won in the bar. Starting at 13:48 Prophecy was 4 minutes behind Sentier and 2 minutes behind Catalina. And 4 minutes in front of Jo-De 7. So the first reach down to Caboolture River mark meant some catchup was required. We made good speed hitting 17knots at times and closed the gap to our main rivals a little.
The work up to D’Bay red saw us passing a good deal of the fleet and we rounded D’Bay red with several other boats. Zingara was just behind us at that point I believe.

We popped the kite and away we went heading for Reef point and then home. We quickly realised that Catalina was paralleling us and Dale must have decided the screecher just wasn’t going to cut it and soon their big blue kite was flying also. We raced to the front of the field and it was neck and neck with Catalina to the Reef Point mark. Rounding Reef Point Catalina had problems gybing the kite whereas the Prophecy crew executed well and from there we had a mad dash to the finish hitting over 19knots in a welter of spray and yahoos.

A fantastic race today and many thanks to all who participated, 18 yachts and 73 sailors! Well done everyone. A great time was had back in the club for the presentation and there was much good natured ribbing of all those who managed to find the sand bank just south east of D’bay red mark, Prophecy included!

Many thanks to MBBC for the sponsorship and the vouchers. Thanks to all of you for making our club racing so enjoyable. 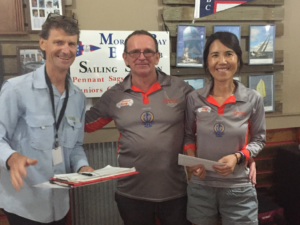 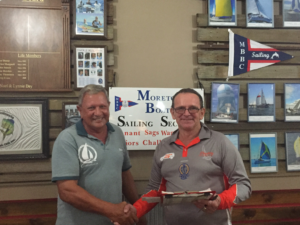 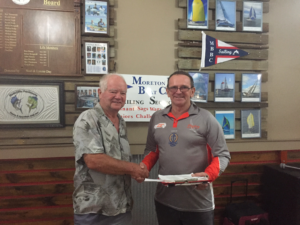