The last time I stood on the podium it was blowing 25 knots and this
Saturday was no different. Still any day on the bay is a good day. Roger
from Happy Daze crewed for me to make for something different. It was a
pleasant change from always sailing alone.
Mind you he never got a chance to come up on deck until well into the
race, Kirin’s radio has never had such a good work out. Firstly Roger
was taking log ons for our own Sags Race and then organising enough
starters to conduct a race. After that he was busy relaying messages
from the Fairway Challenge Race.

Numbers were always going to be down a bit, with the Fairway Challenge
on and such blustery conditions. Nevertheless 8 yachts competed along
with 26 sailors.

I thought it was a valiant effort from Lindsay and the crew on War Canoe
who had already logged on and started the Fairway Challenge to find
conditions in the middle of the Bay too heavy going. But they weren’t
going to be denied a sail. They withdrew from that race and logged on to
the Sags Race flying a kite as well.

When Roger could finally relax move away from the radio and partake in
the sailing he commented ” I’ve enjoyed sailing on this yacht. ”

On behalf of all the place getters l want thank Stewart from ” Pump-it
Concrete Pumping” for all the vouchers and MBBC for the presentation and
friendship back at the Clubhouse.

My apologies to Lindsay and crew on War Canoe for my not informing them
of the change of course when they logged on for the SAGS. When I saw
them  leave Reef Point to starboard, bare away and head to Garnet Rock I
new I’d  had a real DOH moment. The rest of the fleet was heading to D.
Bay Red leaving Reef point to port.

Gotta be better next week, see you then. 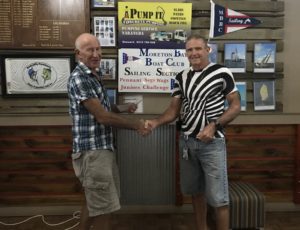 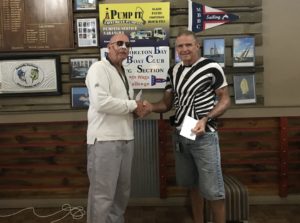 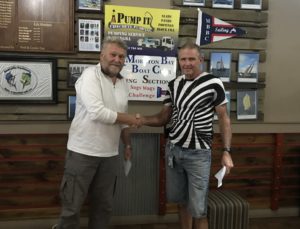 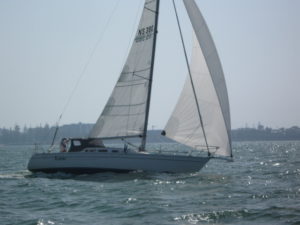