The forecast of 15 to 20 knots proved to be spot on, good work BOM.

The start area was a busy place at 1300 hours with four boats starting
within a two minute period, it was good to see the pre start area was
clear of later starting boats. Carisma and Happy days were on the same
time of 1311 and the contest for windward position at the line was
intense. Happy Daze was showing every intention of being that boat, but
it was not to be. Carisma crossed the line first, on time and at the
windward end. A drag race to the first mark involving Carisma, Happy
Daze, Jaguar, Zingara and Kaveinga ensued . Rounding first, the crew of
Carisma were pleased to see that the waves round the Blinker, although
sizeable were not breaking, a good thing for smaller boats. So it seemed
the reach to Garnet rock would be comfortable. The wind angle was now at
50 – 60 degrees and 17 knots. As we progressed down the second leg we
could see our lead was increasing. Mark on the helm was regularly
calling the boat speed, was that to keep the elderly sail trimmer awake
or just on his toes?  By the time we passed Redcliffe pier we had drawn
further ahead.

Our rounding of Garnet rock mark was very good, missing from our routine
was the sheet snarl of the previous race. Has the old bloke still got
it? Our heading now was straight back to the Blinker with the breeze at
80 – 90 degrees. A whisker pole was set with a tweaker to control the
headsail. Looking back we found we had drawn even further ahead, and
were starting to feel confident of a good finish. Then horrors of
horrors Happy Daze popped their “asymmetric” and were “motoring” so now
we were sailing with our eyes on the rear view mirror. Happy Daze was so
quick she cut our lead by 50 percent over the remainder of the leg being
about four minutes behind when we arrived at the Blinker. Adding to our
concerns was the sight of a rapidly closing cat, Crews Control.

We made a quick rounding at the blinker keeping the pole on the
headsail. This allowed us a fast square run to a point east north east
of the finish line where we gybed the headsail to run to the line with
the wind angle at 120 degrees. It was at about this point we were passed
by a very quick Crews missile with the signature “Coee “from Greg coming
across the water at us. Our speed down this leg was very good and it
seemed to improve once we noticed Happy Daze had given up trying to fly
their “asymmetric”. As we finished we thought Crews Missile had taken
first place but apparently they suffered a gear breakage and then sailed
a shortened course so they were a DNF.

We enjoyed a comfortable win by a margin of about 4 minutes ahead of
Zingara or was that Happy Daze, followed by Jaguar and Kaveinga. Should
I point out that the first five places went to “thirty foot something”
boats, it’s a rare thing in the current fleet. It was a very quick race
of less than 2 hours for Carisma in a very pleasing field size of 18
starters with 68 sailors

Thanks to our sponsor Stewie of ” Pump -it Concreting “and to Roger
Coleman for his work on the “Mike “and elsewhere. 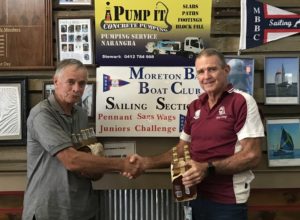 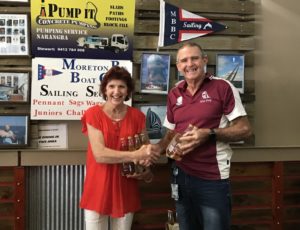 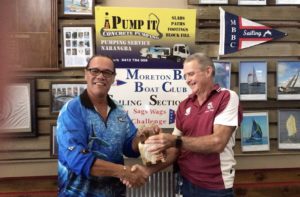 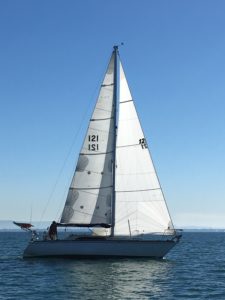