After days of grey skies and much needed rain, nothing could stop the 22
boats with 64 crew seizing the sunshine that broke through at lunch on
SAGS day. Smiles shone from each craft, glad to be afloat after
Wednesday’s poor weather quarantine. Kaveinga, Utopia, Dream Lover a
few, that were also early and getting prepared for their start. As we
counted down the minutes, log-ins flowed in to race command, Happy Daze;
has anyone else noticed how these seem to be cannily timed when Roger
and Margy are head in to wind hoisting sails?

More organised than usual, we enjoyed a pre-race, pre-cooked chicken
wing or 2 (no Double D gimble oven here!), and drank in the surrounds of
the cloud cloaked D’agular Range and Deception Bay. Such gentle
conditions a good sign for we, and the smaller tikes of the fleet. With
this news, ripples of concern went out across the decks; murmurs that
the winner had to be “anyone but him!”  Hopes were on Nice Try, who
might be able to zip around in record speed. Or could a late starter
take line honours from the rear?

Putting that behind us, we made a clean start. Carisma too entering the
race with a perky line below us, vying for first around Reef Point. We
held them at bay on our higher line and with some shuffling of human
ballast around the decks to enhance our sail angle.

Down the front we all went, sailing gracefully for onlookers to admire.
Then, HELLO! Wind gusts appeared as we drew parallel to the weather
front, ominously hanging over Moreton. Roger trimming the sails bit by
bit. Each burst a glimmer of what might be in store if the storm decided
to join the race. We’ll have to wait and see.

Round Garnet Rock, Carisma still on our tail; we turned and faced the
rest of the pack who were well and truely on their way. The radio calls
told us Garnet Rock was a busy place on today’s course. Gladly, all got
round with no protests lodged. Sentier, Freyja, Jenesis all looking
elegant as we passed port to port. This trip Jenesis joined by new crew
member Neve, who we hope helps them get to Gladstone this Easter.

Now, we had on our serious faces. Of course, we wanted to continue
increasing the ground between us and Charisma – doggedly still chasing –
but not the type of ground known as The Rock.

Seraya called it in, making the turn for home. A voice of reason in the
potential madness that was soon to be storm racing.

Utopia once again beaten by their own rudder, withdrew from the race.
Better luck next time.

Our nose still in front, the skyward grey bearing down. What was more of
a concern? The majestic sails of Joe De 7, or the storm? Both were
tracking at pace. One by one, the grey sails and clouds consumed boat by
boat. The last sight before crossing the line was the sails of Jo De 7
engulfing the outline of Charisma. And then there was we. Alas! Not
enough course for her to reach us – phew! 1. Jaguar. 2. Joe De 7. 3.
Charisma. 4. About Time.  Midnight Madness came in at the end, flying
their kite, hoisting all their sails no matter what.

Dripping wet, we dragged into the bustling clubhouse – lots of visitors
come to see the fun at MBBC. Sighs and groans could be heard around the
bar; how is anyone going to contain JVP? Could it have been  anyone but
him?!

It became apparent to all those around, there is no need for any more
extroverts on Jaguar. Poor Roger how does he stay sane? A “transfer fee”
JVP put on his crew’s head, as if it were old South Pacific trader days.
Little does he realise, it’s 2020. Women are free; and will sail with
anyone on these Quandamooka Seas.

Thanks Cate, you can come back to Happy Daze now.

A big thank you to Stewie and Kilma Seafoods for sponsoring  this SAGS
race.

I don’t usually include a photo of 2nd and 3rd place but this is a real
beauty of a classic David and Goliath tussle for those 2 places.
Congrats to Goliath (Jo-De7) for getting over the line in 2nd, Carisma
3rd and About Time 4th, with photographer extraordinaire Dave Meaton on
board, thanks Dave. 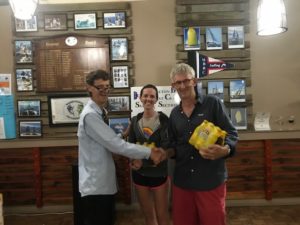 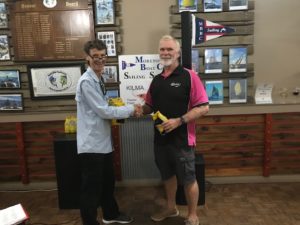 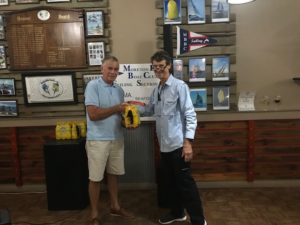 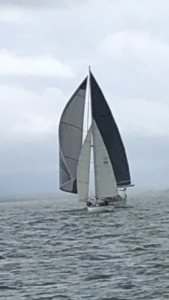