23 boats and …sailers commenced the race with NE winds around 12 knots
when we (About Time) started and strengthened as the afternoon wore on.

Most boats started further up the line than us in an endeavour to make
the Reef Point mark in one run. This was never going to be an option for
a cat not sailing as high and moving sideways as well so we took our
medicine, went in to the reef (without hitting it this week) when we
tacked we were cutting across the line of a lot of other boats on a
starboard tack. It was delightful to see Zingara having to change course
to pass behind us. When we tacked back we found ourselves hard on the
stern of Zingara with several other boats (…, …, & …) well in
front of us. Especially Knee Deep who was somewhere on the distant
horizon. On the leg to Garnet Rock there were a great array of set ups
with spinnakers, code 0s, screechers and standard rigging all on show.
We chose our screecher and managed to catch some of the front runners
before the turn.

On rounding Garnet Rock we started out towards Moreton Island like most
other boats but soon realised we were in negative VMG territory so
tacked in towards the coast thinking any positive is better than a
negative. Knee Deep had already taken the same track and Seraya followed
shortly after us. It proved to be a good move as we got small lifts as
we skirted the shore. On the next tack out we caught Knee Deep and
managed to stay in front of the main pack. However Freyja had followed
the more traditional line and was coming down on us like a freight train
and rounded Reef Point before us.

We noticed a yacht in front of Freyja and thought we were battling for
second or third and a battle it was running nose to nose for most of the
leg. We were below Freyja so would make some headway then get caught in
their dead spot and fall back. As we were battling this out we noticed
the yacht in front of us drop its sails and turn off (obviously not in
the race) meaning we were battling for first and second. Whilst we
didn’t want to lose 5 minutes or write the report our egos got the
better of us and we drop off slightly tightened the sheets and gained
enough extra speed to get across the line ahead of Freyja (second) and
Jenesis (3rd). Seraya 4th. At this stage the rest of the fleet had just
rounded Reef Point so we were very pleased, If not somewhat astonished
that we won.

Many thanks to our generous SAGS sponsor STEWIE and PUMP-IT CONCRETE. 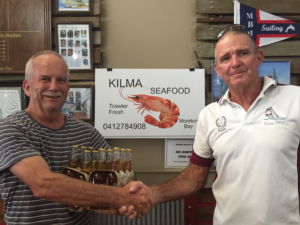 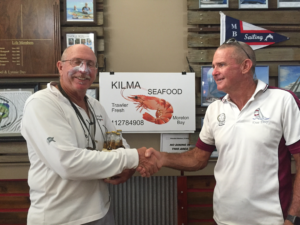 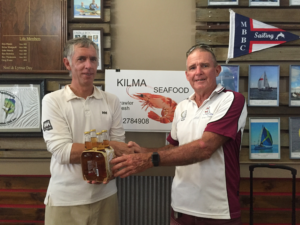