Skip to content
A 1306 start time didn’t look too promising for OD. So with light East / East South East winds predicted we decided early in the piece to have a bit of spinnaker fun and headed out wide from the start so as to position ourselves ready to hoist and run to DBay Red. This allowed Seraya and Spirited to get ahead of us before the mark, but we were catching them.
Spirited hoisted a huge spinnaker after rounding DBay and took off towards Godwin Beach. We passed Blue Moon and were closing on Rimfire and Jaguar as we approached Godwin Beach mark.
We had a nice gybe around Godwin Beach and we were on our way to Caboolture. Spirited went very wide and in close to Beachmere which gave us an advantage. It took us a while to get past Rag Top on his leeward side and then we had Seraya in our sights. After an ill fated attempt to go over Seraya we gave up, ducked behind her and slowly edged past to leeward. By the time we dropped our spinnaker at Caboolture Yellow we were a couple of hundred metres in front of Seraya with Spirited closing pretty fast.
After another good rounding we were close hauled and heading for home, until the inevitable knocks. Three tacks later and we crossed the finish line with Spirited a couple of hundred metres behind, then Seraya, followed by Rag Top. So now after all that it looks like we have to contend with starting at 1311 next week.
Another great afternoon on The Bay with mostly easterly wind up to about 10 knots. There were 15 boats participating and 41 sailers.
We would like to thank the race coordinators and MBBC for donating the prizes.
Nick, Peter, Albert and John.
1st O.D.
2nd Spirited
3rd Seraya 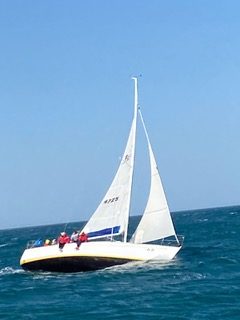