Another beautiful Moreton Bay day greeted the crews of 23 boats for MBBC WAGS on 26.2.20. The breeze was a pleasantly cool E-N-Easterly of 5-10 knots with a decent runout tide for the port course. Having not sailed much lately, we were starting towards the back of the fleet and I expected we would stay there, but we do like light breezes. Infinity’s crew of three opted for our #1 headsail which felt nice and powerful on the short first windward leg where we gained a lot of ground on the boats in front of us, rounding the Scarborough mark just behind the nice and big Beneteau First 47.7 Femme Fatale sailing to establish his handicap.

John took over the helm on the second leg, a long reach to the DB Red mark, while I got the foredeck ready for our old spinnaker. The First 47.7 Femme Fatale powered away on this leg and in doing so slowed Hank and Lorraine on Seraya allowing us to close the gap between us. It was nice to see that Lance sailing two up on Freya was not too far ahead as we approached the D-Bay Red gybe mark.

After gybing Phillip took the helm while John and I played with the spinnaker. For once we did a nice fast set and it was even the right way up! We knew that this would be our leg as many of the boats ahead were shorthanded and chose not to fly their spinnakers and the wind was too far aft to suit the code zeros and asymmetrical kites on some of the other boats. Also the wind was too light for the multihulls today. I was surprised that by the time the kite was set we had caught several boats and had passed the First 47.7. Checking the bearing to the next mark we decided to aim at the distant sail of Carisma (being sailed with the help of Roger from Jaguar intent on “helping destroy” Carisma’s handicap), which seemed to be the right heading although I wasn’t convinced with most of the fleet a long way to leeward of us, except for the First 47.7 which was right on our tail now with his masthead spinnaker set. Luckily in such a light breeze the Northshore 38 slowly but surely pulled away from the much larger Farr First 47.7 and by the time we approached the Caboolture River mark we were in clear second by a fair margin but Carisma was still a long way ahead so we waited till the last moment to drop the kite in the hope of getting it right and having a chance of catching her.

When I finally finished packing the spinnaker I was allowed to take the helm for the tight reach to the finish, passing Carisma and staying in front of a fast finishing Femme Fatale. Official places were Infinity 1st, Carisma 2nd, Seraya 3rd and OD 4th.

Great to see a large fleet this week and a very warm welcome to Femme Fatale and her crew and welcome to WAGS Crews Missile.

Once again many thanks to MBBC for organising and sponsoring the race. 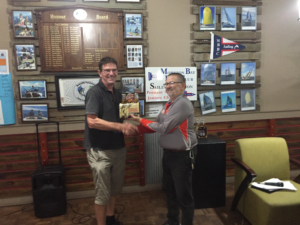 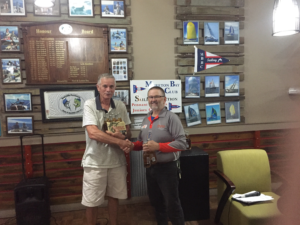 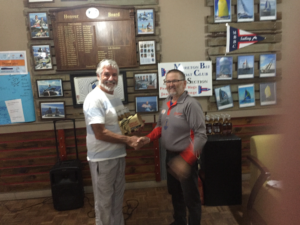