Wind forecasts for the Cowan Marathon were leaning towards 20kts and expectations were for a generous increase during the afternoon. This proved to be reasonably accurate and right up Blue Moons’ alley.

A lean Division One fleet saw nine boats contest the start.
Enthusiasm saw us approach the start line a little too soon. So we had to stall her a little, bringing us high towards the start boat and unintentionally closer than I’d planned to Real Thing. Apologies to her captain Chris.
A timely start just the same, and we settled into a glorious reach under full sail in basically a straight line sprint to the M8 mark off Tangalooma. Sentier had been closing early but suddenly fell behind and unfortunately retired with gear failure.
The two tri-hulls Prophecy and Endorphin had shrunk into the distance soon enough as expected, but we just managed to hold Sundance IV to be first mono across the bay.
This was short lived of course, as she passed us while we powered down to reef sails for the upwind legs.
Blue Moon is not at her best pointing into the wind but mercifully there was not a great deal of that to contend with.
Shayla soon showed us her transom and was well ahead of us by the time we rounded the  northernmost M3 mark. Ragtop and French Kiss had also made good gains into the wind.
We shook out our reefed sails and goose winged down Pearl channel close to the shallows trying to stay out of the worst of the tidal current. Wind against tide sharpened the swells and we enjoyed some good surfing.
We had definitely clawed back some losses.
Turning for home we enjoyed another long reach to Reef Point under full sail. Necessarily easing to keep her upright and steering, but still frequently cracking 9kts. Good enough to keep us all grinning.
Closing on Shayla we finished fifth over the line in 4hrs, 40m, 12sec. and we new we had done well.
Then consequently, pronounced winner on handicap.
Not too shabby for a cruising boat.
Line honours and second place on handicap congratulations go to Prophecy and crew.
Third place to a deserving Shayla.
Thanks to the enthusiastic crew in Zac Sydenham and James Burns.
Thanks also to the officials and fellow competitors, without whom there would be no racing.
Cheers
Keith Falkenhagen
Blue Moon 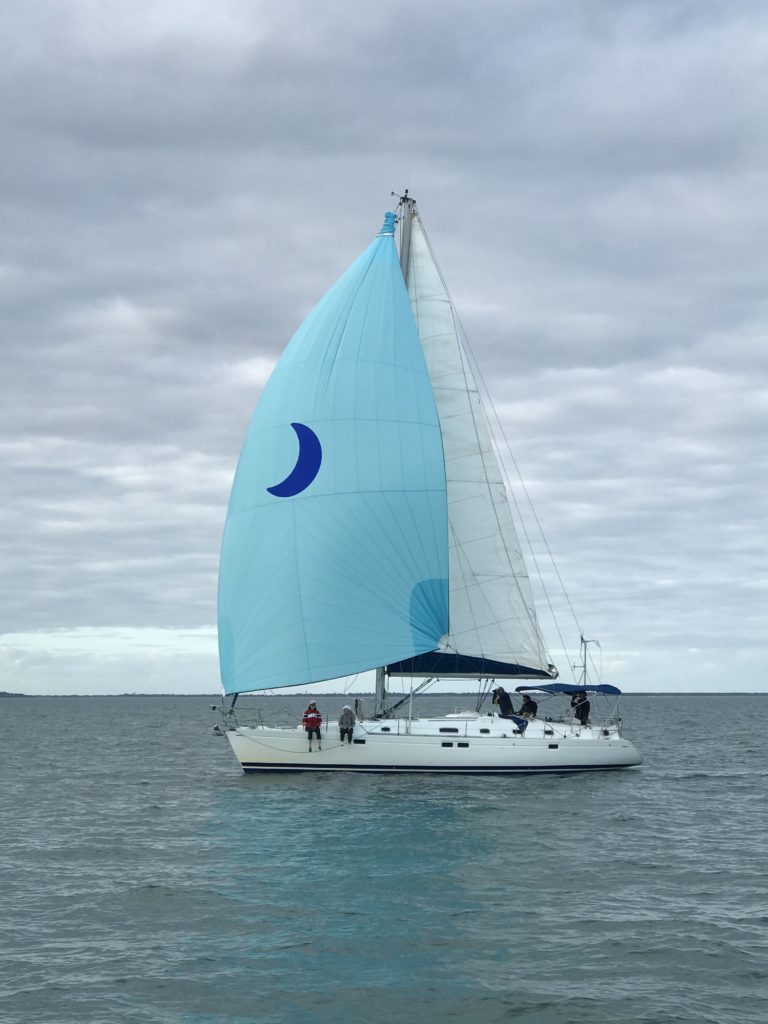